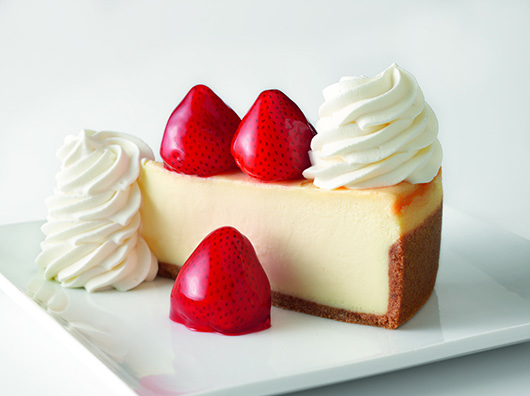 The Cheesecake Factory is celebrating 40 years of delivering one of  the largest and most unique menus in the food world and opening the first location in west Texas at South Plains Mall.

Now OPEN in Lubbock, check out the extensive menu and starting planning your visit that is sure to have you saying yummm!

Story: The Cheesecake Factory story begins in Detroit, Michigan in the 1940’s. Evelyn Overton found a recipe in the local newspaper that would inspire her “Original” Cheesecake. Everyone loved her recipe so much that she decided to open a small Cheesecake shop, but she eventually gave up her dream of owning her own business in order to raise her two small children, David and Renee. She moved her baking equipment to a kitchen in her basement and continued to supply cakes to several of the best restaurants in town while raising her family.

In 1972, with their children grown, Evelyn and her husband Oscar decided to pack up all of their belongings and move to Los Angeles to make one last attempt at owning their own business. With the last of their savings, they opened The Cheesecake Factory Bakery and began selling Evelyn’s cheesecakes to restaurants throughout Los Angeles. Through hard work and determination their business grew to a modest size and Evelyn was soon baking more than 20 varieties of cheesecakes and other desserts.
With great foresight and intuition, their son David decided to open a restaurant to showcase his mother’s selection of cheesecakes. Somehow he just knew that guests would enjoy a restaurant with an extensive dessert menu.